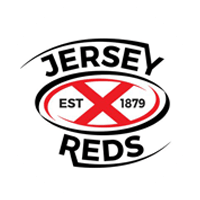 Forward power on a heavy pitch was the key ingredient that saw Jersey come from behind to claim a deserved win over Nottingham, the home side’s third consecutive Championship win at Stade Santander International.

Several hours’ incessant rain eased just before kick-off but nevertheless left the pitch muddy and made handling difficult, putting a premium on a strong set piece.

The Reds claimed an early score, gaining territory through two penalties and a series of phases that culminated in scrum-half Luc Jones burrowing his way over.

Working their way back into the game, Nottingham levelled the scores through a penalty try, awarded after a maul was brought down, earning Janco Venter 10 minutes in the sin-bin.

Fly-half Shane O’Leary slotted a neat drop goal to give his side the lead, with the Reds unable to counter before the break in spite of dominating possession in the closing stages. A late penalty looked like the perfect platform to unleash a driving maul, but Brendan Cope’s touch-finder drifted the wrong side of the corner flag.

The Jersey scrum had more opportunities to show their strength after the break, gaining a series of penalties at scrum time. Initially the home side failed to take advantage, but then Jones sniped down the blind side from a maul and found prop Roy Godfrey in support for the try.

There were isolated flashes of attacking promise from Jersey’s backs, with Brendan Owen looking lively on his home debut, but otherwise this was a day for the forwards. Props Godfrey and Alec Clarey led the way during committed shifts of 72 minutes each, earning the latter the man-of-the-match nomination.

Nottingham’s resistance was eventually ended by two yellow cards in as many minutes – replacement prop Jamie Jack paid the price for one scrum offence too many, and then a maul was brought down, earning Josh Poullet a trip to the bin.

Holding out in defence with only 13 men was too great a task for the visitors and the Reds maul claimed a try for replacement hooker TJ Harris. There was still time for the Reds to claim maximum points, but the heavy pitch and tricky handling conditions took their toll and there were no further points.