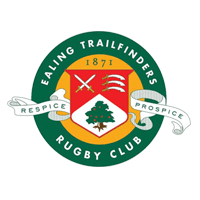 The Green and Whites returned to The Bay for a new decade of Rugby as they faced off against the high-flying Ealing Trailfinders. It wasn’t an ideal start to the new year though as the Trailfinders were awarded an early penalty. Steven Shingler made no mistakes with the kick and the visitors took a quick lead.

The match soon settled into a game of tug of war. Both sides went back and forth with a series of long balls over the top, but no breakthrough was forthcoming. The visitors came close to adding the first try of the evening with a series of scrums right beneath the Nottingham posts. However, some resolute defending by the Green and Whites kept them at bay.

The score wouldn’t change until the very last kick of the half when we finally got level. Some pressure down the left wing spearheaded by David Williams gave way to a penalty just wide of the uprights. Shane O’Leary stepped up and whipped the ball through the posts to equalise and bring the score at the break to a tight 3-3.

The second half started where the first had ended. Both sides heaved to and fro with little avail. That was until a quick break down the left gave the visitors the first try of the evening when Reon Joseph went through on the 50th minute. Whilst Shingler’s conversion flew harmlessly wide, he wouldn’t have to wait long to make amends.

Joseph went through again just four minutes later thanks to some fancy footwork from the Ealing 11. Shingler smashed the conversion home and the Trailfinders raced ahead. A high challenge from Ealing’s Alun Walker on David Williams resulted in the Welshman receiving the first yellow card of the evening on the 58th minute.

With six minutes to play the Green and Whites had a lifeline. Some great build up play down the right wing between Shane O’Leary and Shaun Scanlon allowed the latter to go through and finish a wonderfully executed counterattack. O’Leary was on hand to beautifully guide the ball throught he posts from wide right to add the extras.

However, it was a bridge too far for the Green and Whites who couldn’t find their way back into the game. The final score: Nottingham 10-18 Ealing Trailfinders.