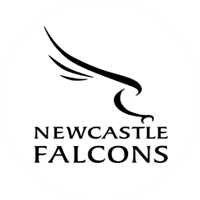 Neil Fowkes’s team were the livelier of the two sides in the opening quarter of the game. Quick tap penalties from Murry kept the visiting Falcons on their toes, and it looked more likely that the home side would open the scoring.

However, a driving maul from the Newcastle pack saw them cross the whitewash first, skipper McGuigan, the benefactor.  England International Toby Flood added the extras meaning the green and whites were up against it.

The second try of the game came from individual brilliance from Falcons winger, Radwan. He danced his way through the Nottingham defence to dot down, but the following conversion was missed.

There was a turn in the tide when Falcons went down to 13 men for poor discipline. However, despite the advantage, this gave the Green and Whites the half time score was 0-12.

The start of the second half was better for Nottingham. David Williams went in to score his sixth for the Green N Whites this season, and closing the gap on the scoreboard. Slick hands from the backline allowed Williams the try.

Shortly after Williams’ try, Toby Flood was the third person in a Falcons shirt to receive a yellow from the referee. Which again gave Nottingham the man advantage.

Newcastle dotted down another to send them ahead 7-19. However, the score for the visitors was eclipsed by a world-class finish from Jack Spittle, who caught a cross-field kick to secure a point for the home team.