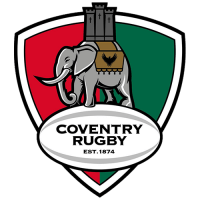 Nottingham started the game brightly in the opening five minutes, and played mostly in Coventry’s 22, but the visitors stole the ball and stole the dominance through the forwards.

Their forwards provided three tries, two by line + maul and one by pick and go, which were marked number 6 Semitiki Nayolo (x2) and one by the hooker Jordon Poole with their corresponding transformations by the number 10 Tony Fenner.

The Nottingham boys tried to take risks with offloads and kicks that didn’t quite go to plan in the first half, and the half time score was 0-21.

In the second half the Green and Whites came out with a different mentality thanks to the words of Neil Fowkes at half time and the performance was totally different.

They came out determined to turn the score on its head, getting two quick tries through Harry Graham that gave hope to Nottingham, but only one was converted by Michael Stronge. Graham’s first try edged Nottingham over the 6,000 Championship score mark!

They continued playing well for the rest of the second half, but again through the line and the maul, Coventry put the score at 12-29 with 20 minutes to go.

Nottingham managed to notch two more tries thanks to their fantastic energy and scrum power. The third try was scored by Luke Frost and converted well by Alex Dolly. The fourth, and bonus point try, for Nottingham was bundled over the line by replacement prop Shaun Evans to score his first of the season.

But a final try by James Martin for Coventry at the last minute left Nottingham Rugby without the opportunity to complete a comeback. The result, 24-36 to Coventry.