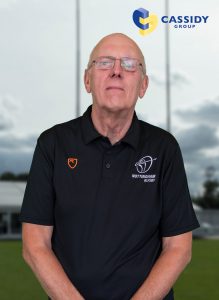 Born in Gosport, Hampshire, Paul moved throughout the country until settling in Nottingham in the late fifties. He was introduced to rugby at a young age through local and Grammar School in Arnold. During this time, Paul player School Counties and local rugby to a very low level. He also played school basketball, school shot and discus and County and Notts AC discus.

Paul is married with two sons and three grandchildren. His wife and youngest son share his love of all things rugby and Nottingham Rugby.

Paul is also a qualified electrician who joined the Prison Service in the seventies for job security where he played for the Prison Service rugby team. In 1980, he joined the Police in and worked there until he qualified for a pension.  He represented the Notts Police at basketball, tug of war and anything that got him away from my job on the streets!

He left the Police in 2003 and then worked in schools chasing truants until retired in 2014.

In 2012, Paul was asked to ‘help out’ during match days and ended up taking on the role of Team Manager. Initially, he had looked to retire from the role two years ago but was encouraged to carry on by his wife as she loves the away weekends to herself! He didn’t take much persuasion.