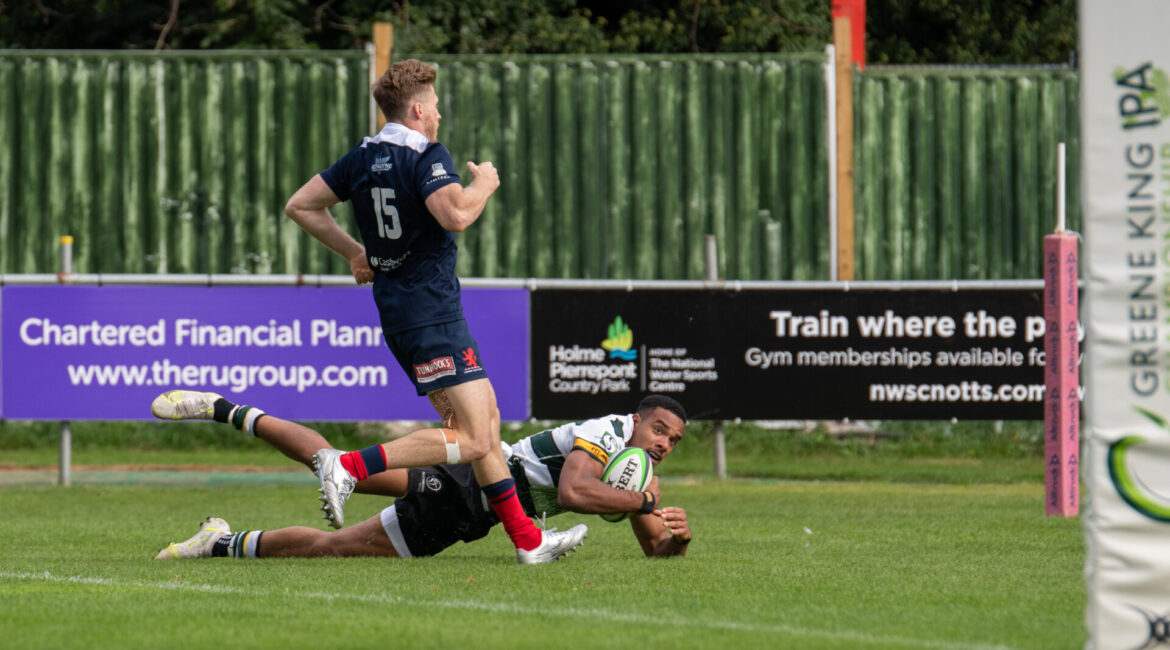 An 11-try thriller at The Bay saw Nottingham Rugby sign off pre-season with an entertaining victory.

But it was the visitors, London Scottish, who got things moving quickly, after a scrum right under the sticks was worked out to the left through Sam Hanks and finished off by John Davetanivalu. The conversion was missed by Laurence May.

Nottingham found their feet 17 minutes in after very quick movement of the ball. It was shifted from left to right and Jack Stapley found himself in acres of space to go over. Sam Hollingsworth hit with an astonishing kick from out wide to put the Archers in front.

Ten minutes later and Nottingham had some breathing space. Carl Kirwan finished off near the posts after an abundance of home pressure. Hollingsworth’s kick was unsuccessful, which seemed to be a theme going forward.

Six minutes before half-time, Leicester Tigers loanee Joe Browning grabbed his first of the pre-season campaign. Josh Poullet pinched the ball from a Scottish ruck on half way, he advanced down the left, offloaded brilliantly to Browning who got himself over in the far corner. The kick, again, missed by Hollingsworth.

On the stroke of half time, the visitors got themselves back in to it thanks to a fantastic chip over the defence from Noah Ferdinand. The kick was missed by May.

Nottingham started the second half with a bang and scored within a minute. George Cox offloaded to scrum-half Michael Stronge down the centre who advanced and finished under the posts. The kick this time was good. 24-10.

And there was no stopping the Archers. A quickly taken penalty after a knock-on saw Charlie Thacker grab a score. Hollingsworth missed the kick.

Noah Ferdinand looked bright for Scottish, as he grabbed his second of the game. A missed tackle in the middle of the park left space for the winger to trick his way past Stapley and Stronge to cross. Kick missed.

Prop Toby Williams got in on the act after 54 minutes, and it was a really simple try. Poullet collected a lineout just inside the 22, and offloaded to Williams who had the freedom of The Bay to cross. Hollingsworth with a good kick.

Scottish managed to notch two more before the final whistle to make the score a bit more respectable. First, Dan Nutton jinked his way through the Nottingham defence before a stolen lineout saw the visitors cross from close-range with the final action of the game.