GETTING TO KNOW JAKE BRIGSTOCK 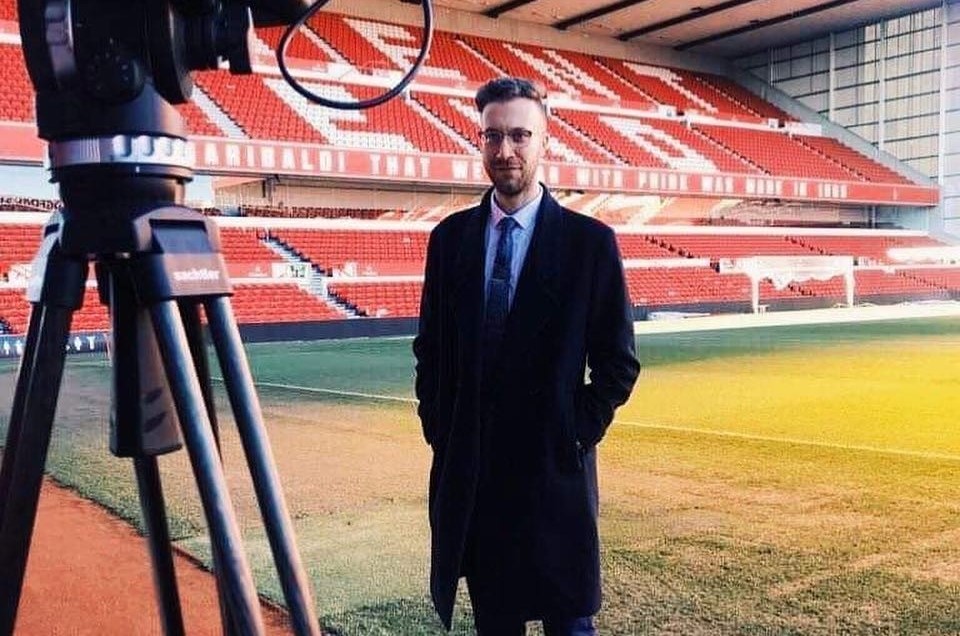 Due to the ongoing COVID-19 restrictions, fans are still prohibited from watching live sport in the flesh.

Prior to the season beginning, just over a week ago, the Championship Clubs Committee confirmed that up to five matches each round will be live streamed for fans.

Access to the live streams can be found via www.championshiprugby.co.uk/live-streams and are available on a pay-per-view basis at just £10 per stream.

Along with live streams of our home games at The Bay you will hear the voice of Notts TV’s Jake Brigstock talking you through the action. So, we took the chance to chat with Jake and get to know him and his feelings about the rest of the season.

Born and raised in Northamptonshire, Jake’s interest in rugby has been an ever present throughout his life. “Growing up in my household it was always rugby. My earliest memories are going to my grandparents and watching the Six Nations, rugby was always on. Every game, every weekend we wouldn’t miss it.”

Sport has always been something very important to Jake and from an early age geared himself up to pursue a career within sports reporting and journalism. “It was something that really interested me from a really young age, I always had magazines and watched every sport I could on the TV growing up.”

“I’ve worked pretty much all my life towards this career. In terms of picking GCSEs and my degree. I always believed I could give it a go; I’ve got a natural enthusiasm for sport and I think that can take you a long way.”

Having studied at Nottingham Trent University, Jake spent some time during his third year doing an internship with local television network Notts TV before going onto join the network permanently following the conclusion of his degree.

“It was brilliant to learn so much from a practical sense. I got to learn how a real newsroom worked, write for their website and it really helped me develop my camera skills.”

Notts TV hasn’t just allowed Jake to home in on his sport reporting skills but also see journalism from another side. “It’s been good to find the different dynamics of all varieties of news, for example, I’ve worked all throughout the pandemic and so it was crucial to have a good understanding of what’s happening.”

Our first game of the season, just over a week ago, was not Jake’s commentary debut with his work at Notts TV allowing him to dabble in commentary in some Notts County games before. Jake also covered the Green and Whites for a short time prior to COVID-19 bringing an abrupt halt to last season.

But having been away from the mic for so long, our defeat to Ealing was Jake’s first live commentary in over a year. “The team is unrecognisable from the last time I commentated on Nottingham. I looked through my old notes and had to change a lot of them. If I am being brutally honest with myself, there was probably a few moments of ring rust as it had been such a long time but as soon as the game got going, I quickly found my rhythm and got into it again.”

Going forward Jake hopes that he can build on his previous commentary experience and get better and better as the season goes on. “Just to keep developing to be as best a commentator I can be for Nottingham Rugby is a big personal goal for me. The opportunity to work with such a professional set up is amazing and it’ll, hopefully, only enhance my skills and abilities.”

When asked how he felt about being the voice of Nottingham Rugby this season, Jake said pride was his overwhelming emotion. “Being able to bring Nottingham Rugby to the fans that can’t come, and watch is an amazing feeling. During the first game I was seeing tweets from people watching all over the world, I saw one from a supporter watching in Australia. I try not to feel the pressure, but I certainly feel immensely proud to be the voice Nottingham Ruby fans hear watching their team.”

We are certainly delighted to have Jake with us at The Bay this season and look forward to hearing him in our next home game against Coventry on the 27th March (17:30 KO).