GETTING TO KNOW SIMON BEATHAM 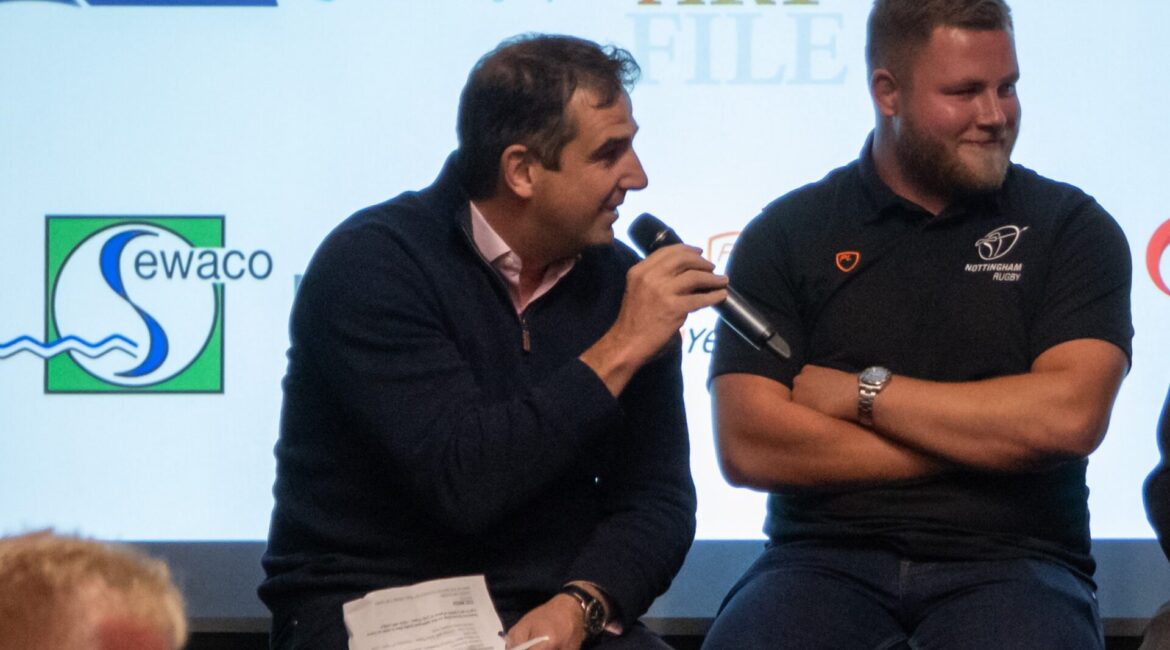 Following on from our interview with Notts TV’s Jake Brigstock, who will be commentating on our home games this season, we spoke to club director Simon Beatham who will be accompanying Jake for much of the season as co-commentator.

Last Saturday’s defeat against Ealing was a day of firsts for many. Not only did 10 debutants feature from the off but it was also the commentary debut of former Green and Whites’ coach and current director Simon Beatham. “I’ve been around the club for years and years. For a long time, I’ve hosted the corporate meals and interviewed players but have never actually commentated on a live game, for a full 80 minutes.”

“It was definitely a new experience, but it was really good. Obviously, it was a difficult game to commentate on from a Nottingham Rugby perspective, Ealing were very good, so I found myself talking so much about them. But for myself, I really enjoyed it. I’m the sort of person that loves to talk about rugby, so this gives me the vehicle to do that for 80 minutes.”

Having been around rugby, and Nottingham Rugby, for such a long time Simon admitted he had to be aware that he made his commentary understandable to all fans, with a ranging degree of knowledge of the game itself. “You have to make it applicable. I was quite conscious of not speaking in ‘coach jargon’ too much but fortunately I’ve not been a coach for a little while so a lot of the jargon they use has changed a lot now and is alien to me.”

In such a unique season like we are in now the chance to be a part of streaming the games for all fans is something that Simon believes is a fantastic opportunity. “We can now watch more Championship rugby than ever before. I’m extremely fortunate that I can still watch Nottingham at The Bay but with the streaming now available I can watch a whole host of Championship games that I’d have had to read about in the paper before.”

“I think this season might, in a bizarre way, make it all much more exciting and we may find ourselves a lot more involved because we can see much, much more of the action.”

Simon confesses that when he was approached about stepping in as co-commentator, he felt it was a quite a natural fit. “I’ve been in and around the club for years. I’ve done plenty of interviews on TV, I’ve done them for radio, pre-match and post-match. I have even been interviewed during matches before when Sky used to cover the Championship. So, it was nothing too dissimilar to things I have done previously.”

As the only way to watch Nottingham Rugby games this season will be through the official streams, Simon acknowledges the fact that he, along with Jake Brigstock, are the voices of Nottingham Rugby this season. “It is desperately sad for all the supporters that they aren’t able to be there.  We have been having to get used to watching sport on the TV and it’s not great.”

“The crowd is typically so important; they give the players drive and extra motivation and now we are having to put that through the streams for the fans. There’s a bit of pressure to be able to bring as good a matchday experience as possible to the paying supporters but of course I am proud to be the one trying to do that.”

Going forward and looking ahead to the rest of the season, Simon believes that the club are in good stead to be competitive on the pitch. “You look at the team, you know the calibre of the individuals and I have to say it is a good Nottingham Rugby team. The challenge is to get them playing together within the number of games we have left, in a season which is as good as we could have hoped for, in terms of the league’s makeup and layout.”

It is a crucial time for Nottingham Rugby with the last year seeing plenty of changes both on and off the field, but Simon is confident that the club are being successful in balancing on and off pitch issues. “We have made the transition from being a full-time professional outfit to a part time team and I cannot emphasis how big a change that is.”

“But Nottingham, as a club, have been fantastic; we have players who have started their careers and are able to play rugby while still going on their ventures into work. And the board of directors deserve a huge thank you for all the work they have done to help with that process.”

“Then you want those players to come together and just show how good they are now and thrive in the environment that has been put together over the last year.”

You can hear Simon, as part of our commentary team, in our next home game against Coventry on the 27th March (17:30 KO).

Access to the live streams can be found via www.championshiprugby.co.uk/live-streams and are available on a pay-per-view basis at just £10 per stream.