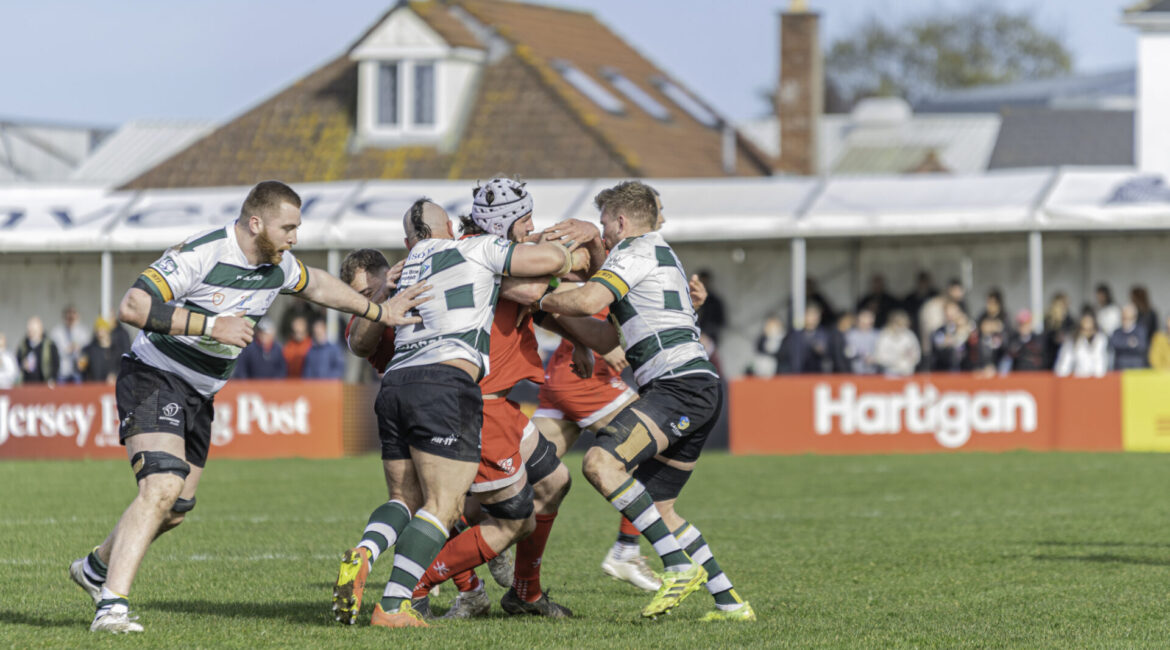 Jersey came out the blocks fast looking to stretch Nottingham early. From the kick off earning multiple penalties and also taking an early numbers difference, with number 11 Joe Browning being sent to the bin early for a reckless challenge, Jersey looked to the big boys to take it to the Green and Whites. Nottingham held firm and managed to exit from a dropout.

Nottingham held firm playing in the bottom of the Jersey slope looking to keep the hosts out for as long as possible. However, no matter how hard the Green and Whites worked, Jersey managed to keep pinning them back with little kicks in behind. After numerous attacks Nottingham managed to get hands on ball and looked to launch their own attack and through multiple phases worked their way up the pitch. Notts couldn’t manage to score and after enabling Jersey to exit, they attacked at the corner and went over for their first at the maul.

Nottingham hit straight back with a great passage of play themselves, they showed fluidity and attacking prowess through usual faces such as Williams and Tweedy. From a smart kick by our no.10, Browning dotted down in the corner.

Jersey looked strong up front both scrum and in lineout, turning over Nottingham ball on a couple of occasions with the backs having to defend multiple phases of attack from set piece. The scrum being dominated, pressure built and the ref was then left with no choice but to award a penalty try. They looked to back this up also off the kick off just before half time, however were unsuccessful after some strong line-out defence from Nottingham.

It was to be Jersey who came out the blocks fastest in the second half after some intricate offloading and then into the big boys for go forward, finished off by the fast boys in the corner. Early 5 points for the home team.

Nottingham looked to cut down the deficit and managed to score soon after, where following a lineout deep in enemy territory, skipper Josh Poullet crashed over from multiphase.

From then out, the game became very broken with both teams throwing the ball around looking to score as the game came late.  Nottingham came close with a broken kick however, was unfortunate not to ground the ball and score.  Jersey managed to break out and scored off a set piece move soon after, targeting the seam off the back of the Nottingham lineout.

Nottingham looked to finish the stronger but pushing passes and taking risks lead to turnover and Jersey made their way up the pitch, finishing in a flourish and seeing the game out until the final whistle.