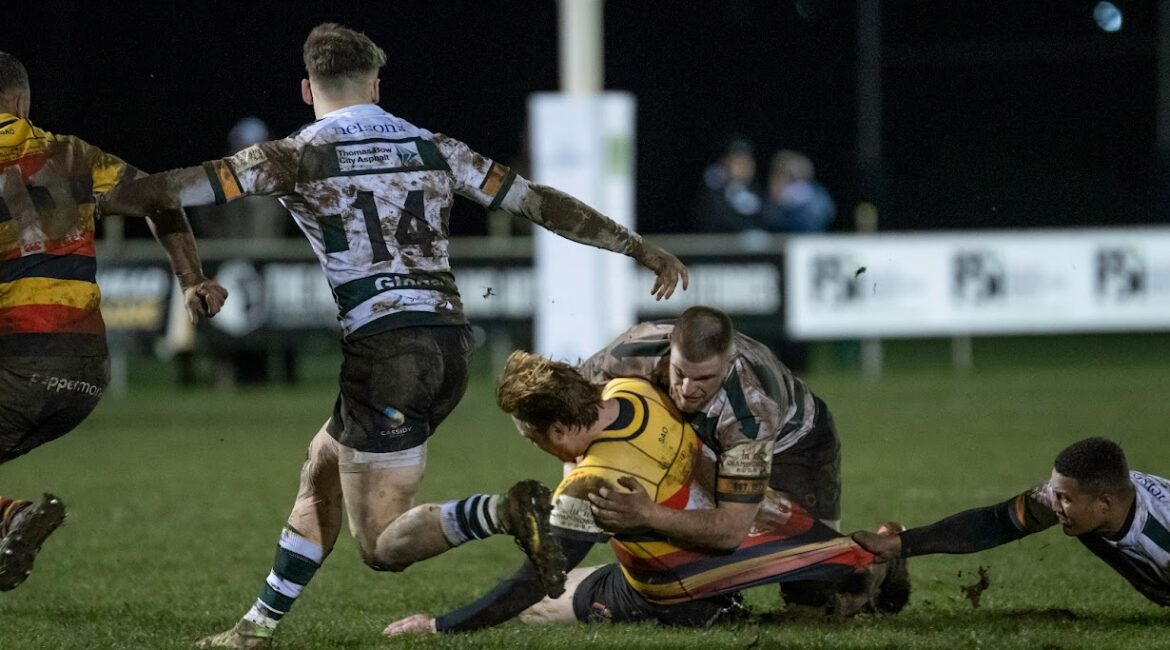 A cold Friday night at The Bay was the setting for a cagey but competitive clash between Nottingham and Richmond. It was the visitors who were able to pull away at the end, handing the Green and Whites their second defeat in five days.

The first half began with neither team really able to create a big chance. Eventually, Nottingham were able to get some pressure on the Richmond try line 15 minutes in, winning a penalty 10 metres out and opting to take a scrum. With the following attack, they tried a crossfield kick to the right hand side, but the defence were able to get their hands on it and clear it away.

Nottingham had a couple more chances to get onto the scoreboard in the first 40. One was through Harry Graham finding some space up the left wing, only to be called back by the referee who ruled there had been a forward pass.

The second was around the half hour mark when they won a penalty 35 metres out and decided to kick for the posts. However, Sam Hollingsworth was unsuccessful with his first kick of the day as the ball sailed to the right of the target and the two teams headed into the halftime break scoreless.

The second half started and immediately Craig Hammond’s men came out firing. David Williams found a gap in the Richmond defensive line and burst through it. A simple offload to Sam Hollingsworth to beat the last defender and Nottingham were seven points ahead.

It didn’t take long for Richmond to respond though, as just five minutes later they latched onto a loose ball in a dangerous position and launching an attack. After multiple phases on the try line, the captain Mark Bright was able to push over for the away side’s first points of the evening

Having been unable to put up a single point in the entirety of the first half, Richmond then took the lead by scoring their second try in six minutes. They kicked to the corner from a penalty in an attacking position and utilised a driving maul to get over the line.

With ten minutes to play the visitors scored try number three, putting the game to bed. Hammering the Nottingham try line again, they eventually got over the line thanks to a quick pass to Ronnie McLean who found a gap in the Green and White’s defence and scored.

It wasn’t all bad news for the Archers though. With two minutes to go, Joe Browning scored the try that won the hosts the losing bonus point. A penalty kicked to the corner set up a driving maul. Nottingham were then awarded a penalty which they took quickly, catching the Richmond defence off-guard and Browning was able to get over the line.