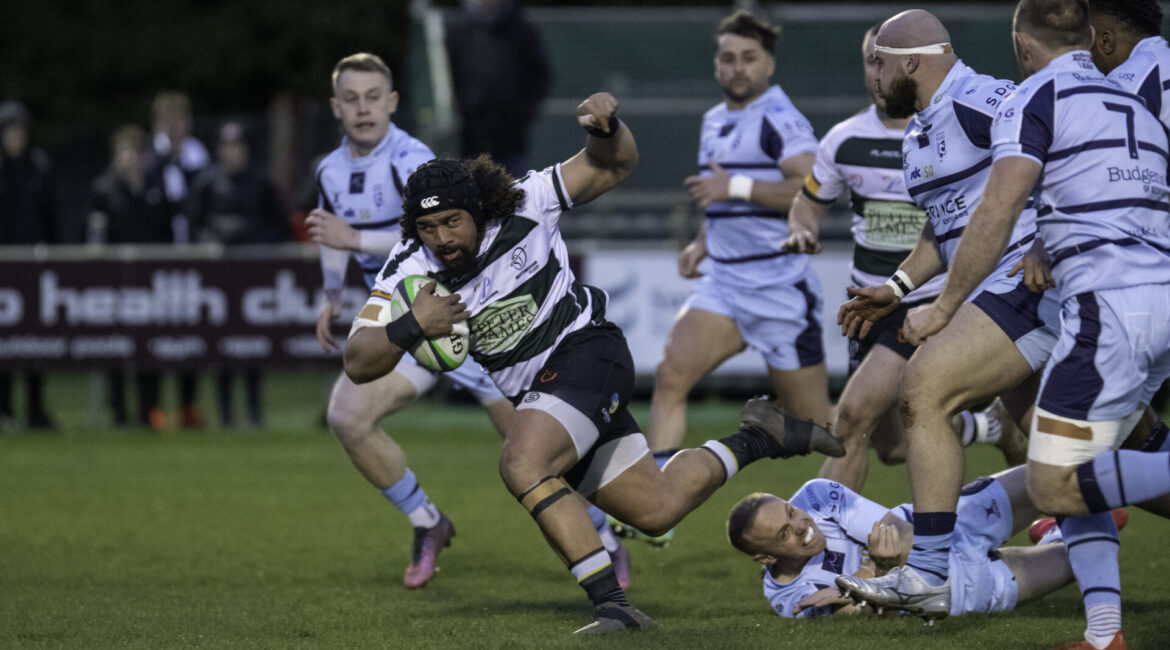 Nottingham will head into the second leg of their Championship Cup tie with Bedford Blues 24 points down after being beaten 14-38 at The Bay, despite some impressive try-line defence.

Craig Hammond’s men started the game on the front foot, with Seko Sio bursting through the Bedford defensive line to start a very promising attack in the first couple of minutes. A few phases later they won a penalty and decided to kick to the corner, setting up a driving maul from the resulting lineout. They then found James Peachey in the corner who dove over the line, scoring his first try for the club and the first points of the night.

Bedford responded well though. A couple of minutes later they utilised a driving maul of their own to get over the line, but Nottingham did well to hold the ball up and keep their lead. However, another couple of minutes passed and they levelled the scores through their captain, Joe Atkinson getting over the line in the left-hand corner.

The rest of the first half was controlled by the visitors. They put relentless pressure on the Nottingham try line, but the Green and Whites put in a huge defensive performance to hold them to just two penalties, which they successfully kicked to the posts.

Bedford got their second try of the night right as the clock hit 40. They won another penalty and decided to kick this one to the corner. They then spread it out wide where their speedy winger, Dean Adamson had loads of space to get the ball down and make the score 7-18 heading into the break.

The second half started with more attacking dominance from the Blues. In the first couple of minutes, Jordan Onojaife broke through the Nottingham defensive line and offloaded it to Adamson, but Harry Graham was able to get back and make the try saving tackle.

Bedford kept the attack going though, but Nottingham stood strong and kept them out once more. However, soon after, debutant Emeka Ilione was shown a yellow card and the visitors decided to kick their penalty for the posts. Just minutes later, Bedford won another penalty right in front of the posts and took the three points once again.

With the difference 17 points with just 20 minutes to go, the game looked dead and buried, but Nottingham kept going, setting up a dangerous attack through Harry Graham. The winger showed his pace down the right-hand side to get within about 10 metres of the Bedford try line. After a number of phases on the try-line, which Bedford did well to keep out, Jack Stapley was eventually able to get over the line to get the homes side back in it.

However, 15 minutes of dominant play later and Bedford put the game to bed, winning a penalty from a scrum at midfield and kicking it to the corner. They won another scrum from the lineout and after giving away a number of penalties, another Nottingham debutant, Dan Richardson was shown a yellow card. Another scrum ensued and the Green and Whites gave away another penalty, and so Bedford were awarded the penalty try.

Right before the final whistle was about to be blown, the visitors made their lead even larger. Some nice hands got the ball over to Adamson in space on the left hand side, and the speedy winger was able to get over the line to make the final score 14-38.

In two weeks’ time, the Archers will be heading to Goldington Road for the return leg of this Cup tie.