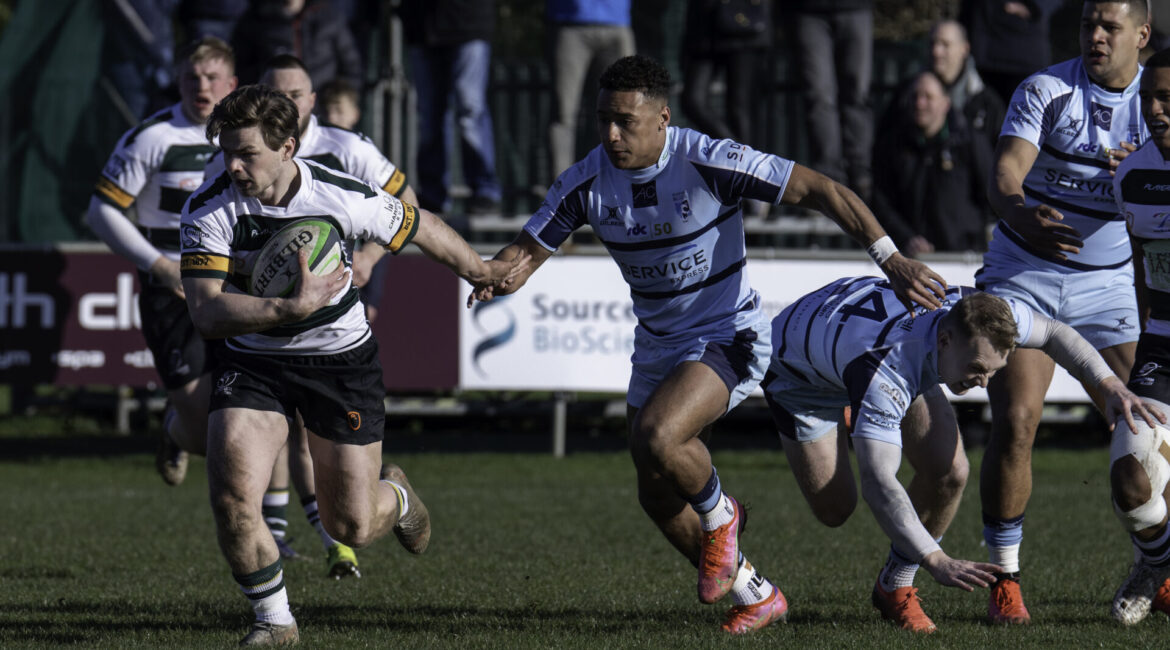 Nottingham were unable to make it three wins in a row on a sunny Sunday afternoon at The Bay. After a competitive first half, the visiting Bedford Blues quickly took control of the game in the second half and ran up the score, putting a total of seven tries past the Archers.

The home side started the game as well as they could have hoped, winning a penalty in an attacking position and kicking it to the corner. From the subsequent attack, Charlie Thacker spotted an opening in the Bedford defence and got through it for the first try of the game.

Bedford didn’t take long to respond though, putting together a good attack of themselves and getting over the try line just a couple of minutes later through Joey Conway. They were unable to even the score up though, thanks to Louis Grimoldby’s conversion incredibly hitting both uprights and bouncing out.

Soon after conceding, Nottingham scored again. An attack began by blocking a clearing kick deep inside Bedford territory was finished in the corner by Morgan Bunting, putting the Archers nine points to the good after only ten minutes.

Ten minutes of entertaining rugby later, Blues took advantage of winning a penalty by kicking to the corner and scoring through some nice footwork from Dean Adamson.

It looked as if Nottingham were going to go into the half-time break two points ahead, but with five minutes left, Conway shrugged off a number of would-be tacklers and got over the line right under the posts to give Bedford their first lead of the game.

Nottingham did get a couple of points back before the break, winning a penalty 10 metres out an deciding to take the three points and go for the posts, but they still went into halftime two points down.

10 minutes after the restart, Bedford put together a nice attack and started hammering the home try line. Nottingham showed some impressive defending by keeping them out for a while, but eventually the pressure was too much and Bedford found Adamson out to the left wing with a long ball.

The game wasn’t over yet though, and Nottingham got a try of their own with a driving maul from a lineout 10 metes out. It was Archie Vanes who got the ball down over the line to make the score 22-26.

However, it was only five minutes later when Connor Tupai found a gap in the Green and White defence to score Bedford’s fifth try of the afternoon.

That fifth try seemed to put the game to bed, as just six minutes later, Rueben Bird-Tulloch managed to get through the Nottingham defensive line himself at the halfway line and take it all the way for the try.

The Archers were so close to getting their deserved bonus point try with what looked to be a promising attack, but a mishandled ball gave it back to Bedford and they were able to clear their lines.

Adamson put the bow on an already impressive individual performance and a great team win for the visitors with his third try of the game, taking advantage of an overlap on the left-hand wing and taking it all the way to the try line.