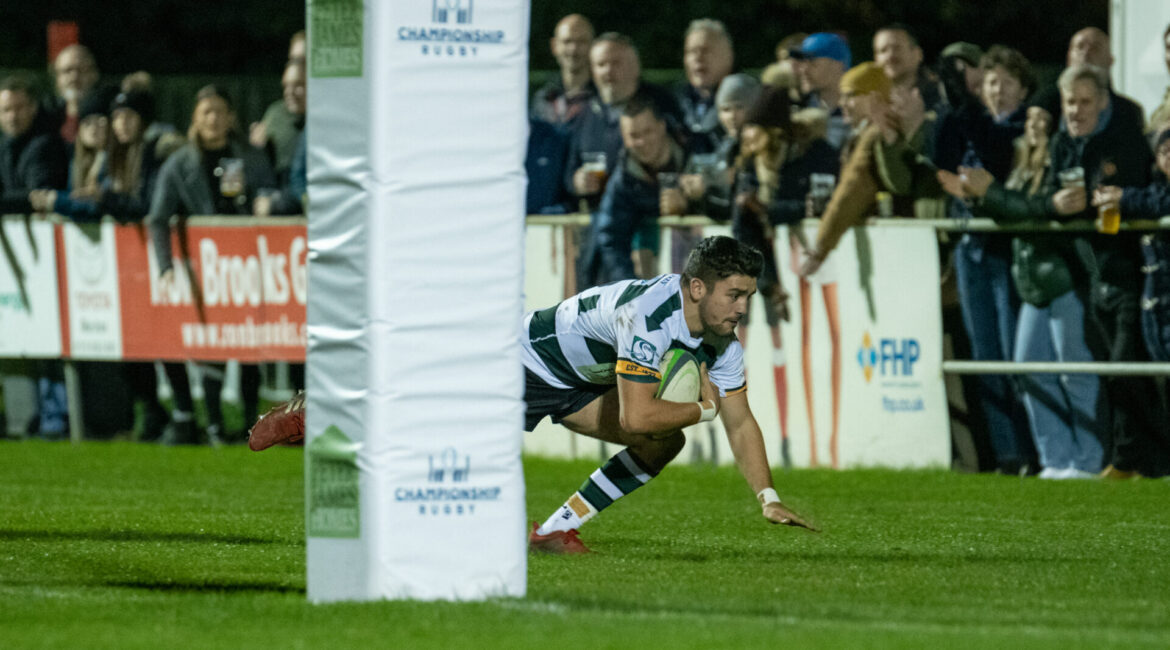 London Scottish were quick off the mark at The Bay as Harry Sheppard offloaded in the middle to Cameron King who evaded the tackle and scored under the post. Sheppard was the converter on six minutes.

The Archers were only behind for three minutes as Nottingham piled on the pressure and breaking the line of Scottish through Elliott Creed who skipped the tackle in the middle before offloading to David Williams to score his 40th try for the club.

And the home side hit the front on 12 minutes with a free-flowing attacking effort. All through the middle, from Stronge to Bale to Bunting who eventually finished off under the sticks. Converted by Bale.

Nottingham pushed further in front on 20 minutes when Harry Graham intercepted a pass out wide, mid-way inside his own half, before running the rest of the length of the pitch to score, again, under the posts. Bale with the successful conversion.

Dan Nutton was sent to the bin on 25 minutes for a deliberate knock-on.

Michael Stronge secured Nottingham’s bonus point on the half hour mark with a fourth try under the posts. David Williams managed to keep in a Scottish box-kick before playing inside to Elliott Creed before offloading to Michael Stronge for his third for the club. Converted by Bale.

The last action of the first half was another sin bin for the visitors. This time it was Harry Sheppard for a tip-tackle. Bale scored from the resulting penalty.

Nottingham started the second half in quick fashion as George Cox bundled his way over the line which was converted for the 5th time by Elliot Bale.

The third yellow card of the game fell in the way of Nottingham as Scott Hall was adjudged to be offside.

Immediately after, London Scottish took the penalty early and Dan Nutton found space to score Scottish’s second of the game. Laurence May with the conversion off the post.

Charlie Gayther was having a card party, issuing his 4th yellow card of the game, and this time to even things up as Nottingham’s David Williams was the receiver for dissent. The home side down to 13.

Scottish took advantage of their numerical advantage as they scored a second try of the second half through Leo Fielding in the corner thanks to an overload. May couldn’t convert from the wide angle.

The visitors really turned the screw in the second half, and they themselves had their 4-try bonus point just less than 10 minutes from time as they piled on the pressure on the line which was finished off by Javiah Pohe. No conversion.

Elliot Bale pulled Nottingham clear with three minutes to play with a beautiful penalty from 40 yards.

David Williams was sent off with one of the last plays of the game for a second yellow card, this time for a deliberate knock-on. But there was still time for Scottish to get their 5th try of the game, scored by Selway and converted by May.