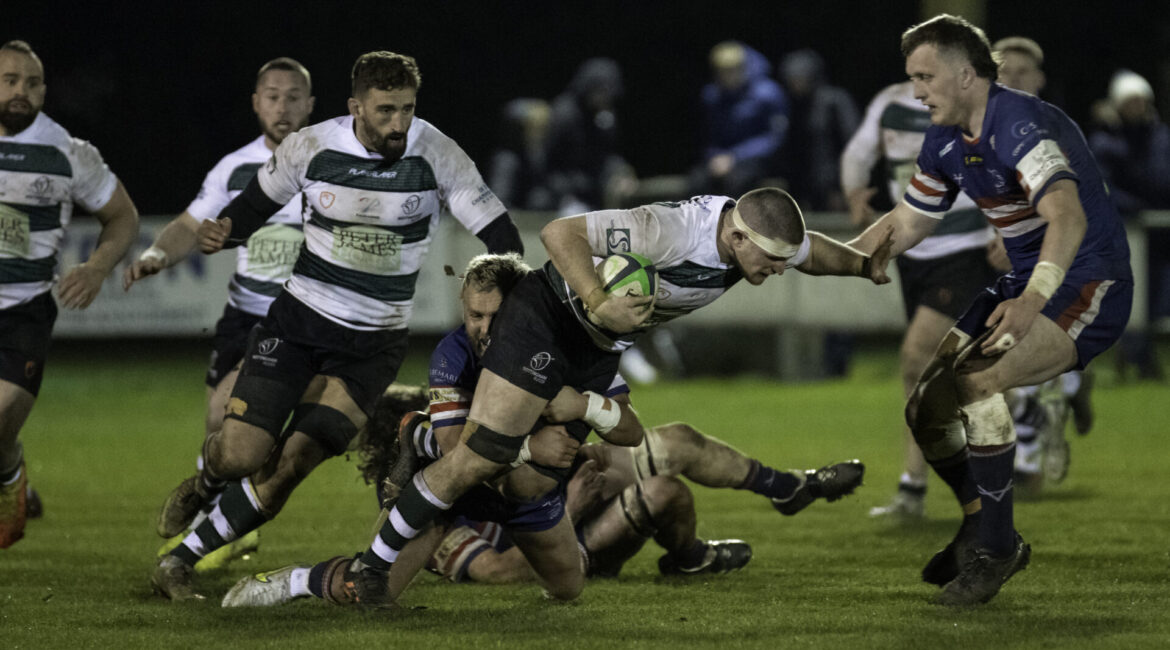 In the final game of the league season, Craig Hammond’s men put up a big fight but were unable to stop a very strong Doncaster side from jumping into first place in the Championship table.

Early on, it looked as if Doncaster might quickly run away with it. They were able to get the ball over the line twice in the first five minutes from lineouts. Nottingham’s defence stood strong however, holding the ball up over the line on both occasions. The visitors did eventually get their first try of the evening eight minutes in. From an extended attack from another lineout, Sam Olver kicked through to Maliq Holden who landed on it over the line.

Minutes later they got their second, breaking through the Green and White defence from far out. Nottingham did well to recover, but Kyle Evans was able to dive over the line in the corner.

A third looked an inevitability for Doncaster twenty minutes in, but it was another impressive defensive stand from the Archers, stopping the dive for the line and clearing their lines.

Despite the relentless pressure early on, Nottingham grew into the game and looked to threaten the Doncaster defence 25 minutes in. Michael Stronge spread it out wide to Charlie Thacker who found space to run on the left-hand side. Unfortunately, the defence was able to quickly regroup and prevent the attack from going any further.

The Archers came right back though, putting together a nice attacking play and eventually winning a penalty 22 metres out. Deciding to kick to the corner, they set up a driving maul, but the Knights were able to steal back possession and keep their 12-point lead heading into halftime.

Nottingham came out of the break firing on all cylinders, winning a penalty and kicking to the corner in the first five minutes. They tried to utilise a driving maul from the lineout, but the Knights’ defence played it well and were able to drive it out and win a lineout of their own.

However, just as Nottingham were able to grow into the first half, Doncaster grew into the second. After surviving Nottingham’s early pressure, they put together an attack of their own, winning a penalty and kicking it to the left-hand corner. They created a driving maul from the resulting lineout and were able to drive it over the line through George Edgson for their third try of the game.

Around the hour mark, Doncaster almost set up a big scoring opportunity from a long way out, finding space on the left-hand side. Sam Hollingsworth was there to intercept a pass to cut it out, but a mishandled ball lead to another chance for the visitors to score their bonus point try. Fortunately, Harry Graham managed to get his hands on the loose ball and calmed the game down.

Nottingham weren’t down and out yet either. With 10 minutes to go, David Williams set up a promising opportunity by turning on the jets and running past a number of would be tacklers up to the 22. However, Nottingham couldn’t do anything with the great attacking position and the defence won the ball back and cleared their lines.

A few minutes later, Doncaster picked up the bonus point in their important win. Lloyd Wheeldon spotted a gap in the Nottingham defensive line and burst through it to score the fourth try of the game.

Morgan Bunting did manage to dive over the line the final minute for a consolation try but it was far too little too late. Doncaster Knights now sit atop the Championship table and need Ealing Trailfinders to slip up against Richmond on Saturday to win the title.

Nottingham meanwhile finish a difficult league season in 10th place and look forward to next Friday’s cup clash with Bedford Blues at The Bay.