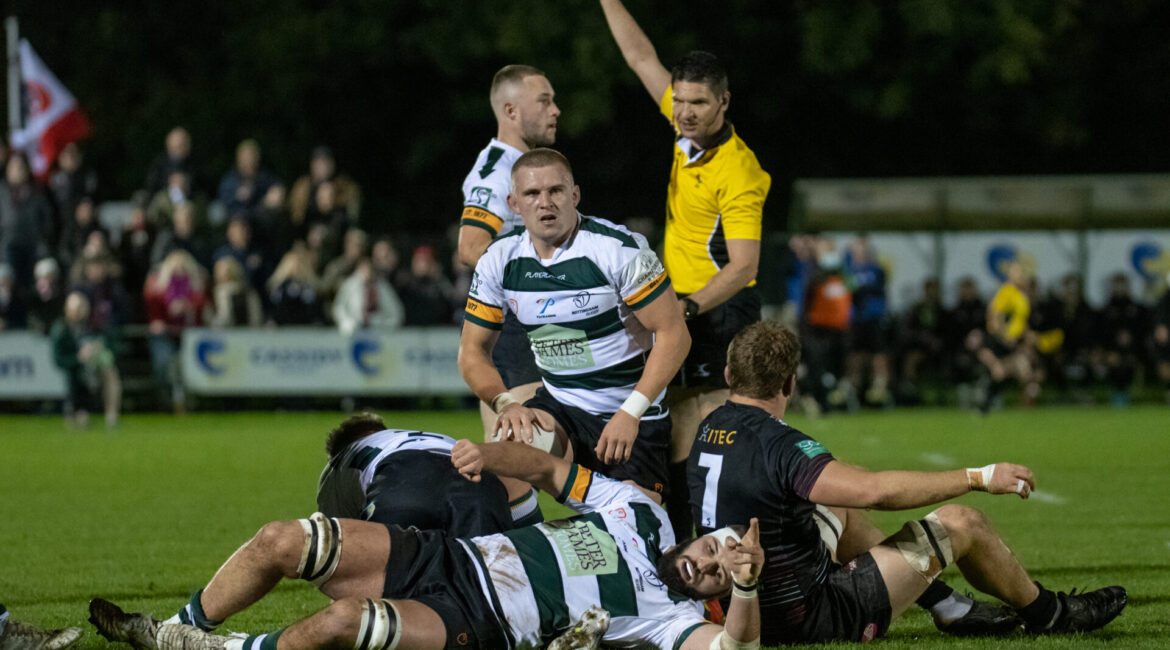 A sloppy 80 minutes of rugby from Nottingham gave Pirates the opportunity to leave The Bay with a bonus point victory.

Just two minutes in a quick penalty was taken by Pirates and Tom Channon crossed the line in the corner. Successful conversion by Arwell Robson.

Four minutes later, Joe Elderkin had the chance to score a second for the visitors as he dummied a pass to his left, jinked past Jack Stapley, then eventually passed left but only as far as Sam Hollingsworth right on the try line.

But Pirates did find their second on seven minutes as they pushed a maul from a line-out on the 22, applied the pressure and bundled their way over. Converted by Robson again.

The Archers began to see a little bit of the ball after ten minutes, and their patience was rewarded from a very strong driving maul, finished off by co-captain Jake Farnworth. The kick was missed by Sam Hollingsworth.

Sam Hollingsworth opted to edge Nottingham’s points tally closer to that of the visitors on 20 minutes as the Archers won a penalty 25 meters out. Hollingsworth slotted beautifully. 8-14 the score.

The visitors added three more points five minutes before the break as Robson chipped home a very simple penalty in front of the sticks. That was the last action of the half.

It was a sloppy start to the second half for Nottingham as Pirates stole a lineout close to the Archers’ try line and Patrick Schickerling crossed the whitewash. Robson converted off the post.

Nottingham couldn’t seem to keep hold of the ball in the early stages of the re-start, and ill-discipline cost them again in front of the posts as they gave away a penalty which Robson chipped over.

Charlie Thacker took a heavy knock just before the hour mark and was replaced by Morgan Bunting for the home side.

The second half was lacking action as neither team could seem to retain possession and create any meaningful opportunities – although a handling error from Scott Hall allowed AJ Cant the opportunity to break down the right, but his nudge was well read by Elliott Creed for Nottingham. The visitors secured their bonus point with the last play of the game as they pushed a maul over the line in the corner after a successful lineout. Benjamin the scorer but there was no extras.