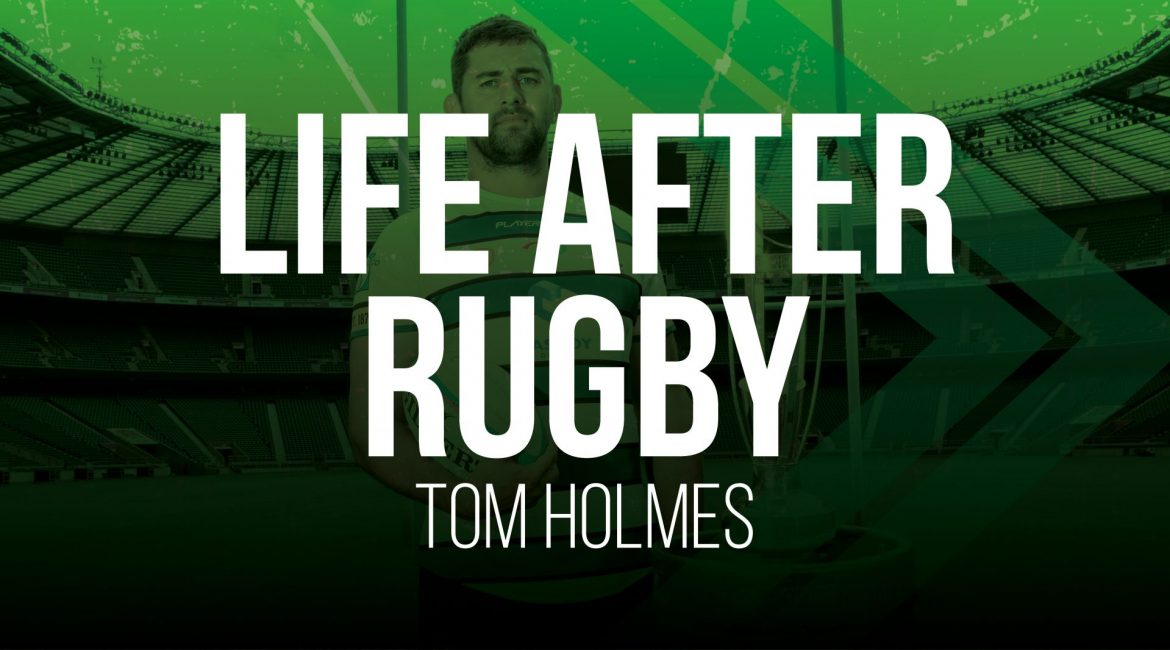 Nottingham’s captain prepares for a life after rugby

Nottingham Rugby Club captain Tom Holmes is adding another string to his bow, through a work placement with Goodman Corporate Finance. He’s taken up the development opportunity with the Long Eaton based company to help him prepare for a new career after rugby, which he’s played professionally since the age of 17.

Tom, now 30, said: “While I’m sure I have at least another two or three seasons of top flight rugby in me, you never know when something might happen to cut that short, so I decided it was time to be proactive in getting prepared.

“I’ve made forays into further education to widen my horizons in the past but nothing has really stuck. I met Paul Goodman, managing director of Goodman Corporate Finance, through my coaching role at Long Eaton Rugby, where his company is a sponsor, and I was delighted when he agreed to put together a mentoring programme for me.”

Goodman Corporate Finance is a specialist broker that provides small to medium sized UK businesses with a suite of commercial finance solutions through its extensive panel of lenders.

As part of the mentoring programme, which runs on his ‘off days’ each week, Tom is spending time in the office learning the ropes with Paul, as well as attending meetings with clients to see how the team draw on their own expertise in commercial finance and wide panel of lenders to arrange the right bespoke finance for each individual customer. Paul is also arranging for Tom to spend some time with lenders to see the corporate finance world from another point of view.

Paul has a background as a rugby player himself and remains very much involved in the sport. He said: “We’re very excited to offer this mentoring programme to Tom, and hopefully to more players from Nottingham and other local teams in the future.

“It’s a good way for us to give back to the community and support local talent, offering sports professionals a ‘soft landing’ into the commercial world once they retire.”

“I’ve been on the programme for two months now and I’m enjoying learning and being productive,” said Tom. “I would love to actively bring in some business and prove my worth and I hope to continue working with Goodman until I retire from professional rugby.

“The experience with Paul and the team is teaching me that I have a lot of transferable skills and values that I can bring to corporate finance.”

Steve Smith, Nottingham Rugby Chief Operating Officer, says the club wants its players to have the opportunity to gain other experiences while they are training and playing, and it’s important that they use their time off effectively.

“However long their playing career, our team members will realistically have another 30 or so years to work after they retire from rugby, so they have to prepare for the future. We do what we can to help them on an individual basis to make the most of their time away from the pitch. For example, we arrange placements with local companies including our sponsors, or work experience related to university degrees that the players are working towards, and some players have paid employment in addition to their rugby. We also support players like Tom who go out and organise their own placements.

“Tom’s link with Goodman Corporate Finance is a tremendous opportunity for him. He’s a very driven individual and a great leader at the club. The time at Goodman will give him some real life skills, working with some really good people and will hopefully open up future opportunities for him.”

Nottingham Rugby Club also has close links with Nottingham Trent University, where it delivers the rugby programme for its top teams. This means players can keep up their education while training full time, and attracts great players to Nottingham who want to play while studying. There are currently around 10 players in Nottingham’s squad who were or are currently studying at the university.

‘Be ready to cope in a very different world’

“The main thing is that players have to help themselves when planning for the future,” said Steve. “Tom has gone out to get his placement and we’ve worked out the practicalities together. Many players think it will just happen for them but it won’t without their input.”

Tom added: “The most daunting thing about moving to the ‘real world’ is that in rugby you have a set routine and diary. That all ends quickly and you have to be ready to cope in a very different world.

“I’m incredibly lucky that Paul has taken me under his wing, treating me like an equal from the beginning. I believe we are likeminded people with similar values of respect and professionalism – just like in rugby, we do the best we can for the team, get the job done and try to be on the right side of a result.”